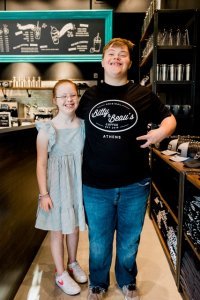 August 15, 2022 – Bitty & Beau’s Coffee, the North Carolina-based company that reinvented the coffee experience, will soon open their thirteenth store in Auburn, AL. Named after their 2 children with Down syndrome, the brand was first launched by the Wright family in 2016 to change the way people see people with disabilities — especially in the workplace.

Wright added, “With the support of the community behind us, we are energized to bring Bitty & Beau’s Coffee to Auburn, AL, where we know that our store can positively impact the entire community.”

About Bitty and Beau’s Coffee:

Brewing up more than just delicious drinks, Bitty & Beau’s Coffee provides a one-of-a-kind experience and delivers exceptional customer service while paving a path for people with intellectual and developmental disabilities (IDD) to work, become more valued, accepted and included. Named after their two youngest children, Bitty and Beau, Ben and Amy Wright founded their flagship store in 2016 in Wilmington, North Carolina. Since then, the Wright’s have franchised their brand with a total of twenty[1]six stores across the United States and employ hundreds of people with disabilities.

VIDEO OF SURPRISING OUR NEW EMPLOYEES IN AUBURN