New Class of Legends Inducted into the Tiger Trail of Auburn

New Class of Legends Inducted into the Tiger Trail of Auburn 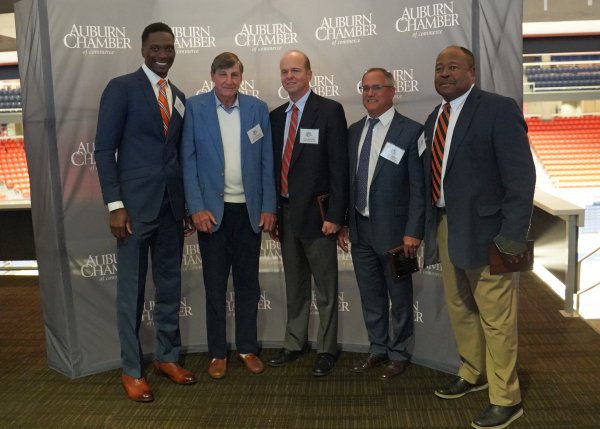 April 11, 2022 —The Auburn Chamber, along with Auburn University Athletics and the City of Auburn, inducted the following class of athletic legends into the Tiger Trail of Auburn on April 8 at the Neville Arena: Emily Carosone, Kirsty Coventry, Marquis Daniels, Jimmy Dozier, Chip Spratlin, Stan White, Joe Whitt, Sr., and Greg Williams. The new inductees officially join the ranks of 130 past Tiger Trail inductees and is the largest class since 1996. Each inductee will be represented by an engraved plaque placed in the sidewalk of downtown Auburn among the plaques honoring other Auburn greats.

Inspired by the vision of the late Ken Brown, the Auburn Chamber of Commerce began the Tiger Trail in 1995 to honor outstanding athletes, coaches, and administrators. This year, a new class of honorees was inducted into the Tiger Trail during the Tiger Trail induction ceremony. Over 150 guests were welcomed by Auburn Chamber President/CEO Anna Hovey and remarks were given by Auburn University Director of Athletics Allen Greene and City of Auburn Mayor Ron Anders. Auburn University Director of Strategic Communications Jeff Shearer introduced and provided recognition of the inductees.

All-American Emily Carosone is Auburn softball’s all-time leader in career batting average, hits, runs scored, on-base percentage, and hit by pitches. She ranks in the top three for the Tigers in career RBIs, doubles, home runs, slugging percentage, and games started. Carosone also holds Auburn’s single season records for runs and hits by pitch. A three-time National Fastpitch Coaches Association All-American and All-SEC performer, Carosone helped her team win the SEC Tournament Title in 2015 and 2016 and led the Tigers to back-to-back appearances at the Women’s College World Series. After graduating from Auburn in 2016, Carosone played four seasons of professional softball and competed in the Tokyo Olympics, becoming the first Olympian in Auburn softball history. Currently, Carosone is an assistant coach with Auburn softball.

Kirsty Coventry led the Auburn women’s swimming program to three consecutive NCAA Championships in 2002, 2003, and 2004 and was the top individual scorer at the 2005 NCAA Championships, capturing titles in the 200 and 400 IM and the 200 backstroke. Also in 2005, she was named the SEC Swimmer of the Year. As a member of Zimbabwe’s Olympic team, Coventry earned a total of seven Olympic medals, including two gold medals. She remains the most decorated Olympian from Africa. In 2018, she was appointed by the President of Zimbabwe to serve as the Minister of Youth, Sport, Art, and Recreation. She also served as the Chairperson of the IOC Athletes’ Commission, the body that represents all Olympic athletes worldwide, from 2018 to 2022.

Marquis Daniels began his Auburn basketball career and played a total of 111 games averaging 13.8 points, 5.6 rebounds, 2.6 assists, and 1.9 steals in 28.7 minutes per game. In 2003, Auburn reached the Sweet 16, where Daniels averaged 23.3 points, among other impressive stats, which earned him the Team MVP as a sophomore. He also earned Team MVP as a junior and senior, and he was named to the All-SEC second team his senior year. After playing in the NBA for the Mavericks, Pacers, Celtics, and Milwaukee Bucks, Daniels is now an assistant coach with Auburn basketball.

Jimmy Dozier, a native of Columbus, Georgia, competed on Auburn’s track & field team from 1958-1962. Under the direction of Auburn’s first track & field coach, Wilbur Hutsell, Dozier and his teammates helped the Tigers win their first SEC Track Championship in 1961. After Auburn, he entered the US Navy where he enrolled in flight school. After his military service, Dozier became a career pilot with Delta Airlines, where he later retired.

Originally from Johnson City, Tennessee, Chip Spratlin played golf at Science Hill High School before attending Auburn. As a freshman, he redshirted and after playing one match as a sophomore, he became a regular member of Auburn’s team in his junior year. In Spratlin’s senior year, the Auburn team went to the NCAA Championship in Columbus, Ohio, at the Ohio State University Golf Club, where Spratlin’s competitors included freshman Tiger Woods. Spratlin competed the best in the field which earned him 1995 NCAA Individual Champion, the only golfer in the history of the Auburn program to win that title. Spratlin is also an All-American and was presented the Arnold Palmer Award as the collegiate golfer of the year. After his collegiate career, Spratlin played on the PGA Tour before making a career as a Pilot.

Stan White redshirted at Auburn in 1989 before becoming a four-year starter, setting the program record for 45 consecutive starts. White was the 1990 Peach Bowl MVP and the 1994 Senior Bowl MVP. In 1993, White led the Tigers to an 11-0 season. After playing four seasons in the NFL for the NY Giants, he opened an insurance and financial services agency. In 2001, White joined the Auburn Sports Network and continues to call games today.

Joe Whitt’s collegiate football career began at Alabama State where he played for three years. After earning bachelor’s and master’s degrees, Whitt began his coaching career in 1974 as an assistant coach at Robert E. Lee High School. After seven years, he moved to Auburn University as an outside linebacker coach. In his 25 years as an assistant coach, Whitt served four different head coaches including 12 seasons under Pat Dye. His roles included defensive assistant and coaching defensive ends, defensive line, and linebackers. Whitt was a part of five SEC Titles (1983, 1987, 1988, 1989, 2004), two undefeated seasons (1993 and 2004), and coached in seventeen bowl games. Whitt, known as one of the game’s top recruiters, became an assistant athletic director and fundraiser for nine years after the 2005 season.

Since its beginning, Greg Williams has led Auburn’s equestrian program, building the foundation of excellence both on and off the field. In 2006, Auburn’s equestrian team won its first National Title and has since earned five additional National Titles under Williams leadership (2011, 2013, 2016, 2018, and 2019). Since 2008, Williams has led his teams to earn several titles ranging from Hunt Seat national titles, a Western National title, four SEC titles, three Southern Equestrian championships, and his student athletes have combined for more than 100 All-American accolades since the 2010-2011 season. Williams began recognizing students for excellence in the classroom starting in 2013 and more than 80 NCEA Scholastic All-Americans have been a part of the program. Individually, Williams has been named SEC Coach of the Year three times (2019, 2020, 2021) and the NCEA Coach of the Year in 2019 and 2020.

For a complete list of Tiger Trail inductees and plaque locations visit webgis.auburnalabama.org/tigertrailviewer.

If you would like to contribute to the Tiger Trail tradition and help defray costs, please consider making a donation to the Auburn Chamber Foundation. You may contact the Chamber for details at (334) 501-3292.